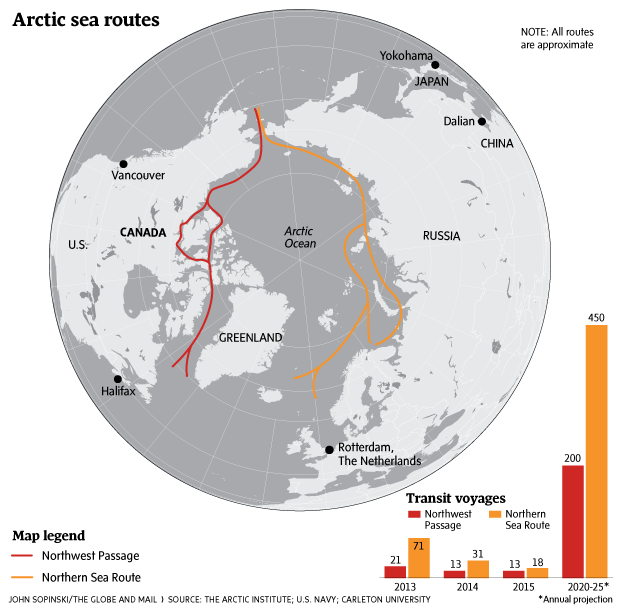 The Chinese government has published a lengthy Northwest Passage shipping guidebook that lays the foundation for cargo vessels to sail across the top of Canada.

Spanning 365 pages of charts and detailed information on sea ice and weather, the Chinese-language Arctic Navigation Guide (Northwest Passage) was compiled by ocean and shipping experts as a way to help the country’s mariners plan voyages through a waterway seen as a valuable shortcut between China and North America.

“There will be ships with Chinese flags sailing through this route in the future,” Liu Pengfei, a spokesman for China’s Maritime Safety Administration, which published the book, told reporters Tuesday. “Once this route is commonly used, it will directly change global maritime transportation and have a profound influence on international trade, the world economy, capital flow and resource exploitation.”

The publication of the book makes tangible China’s ambitions in the Arctic, where warming temperatures are melting new openings for the movement of goods through waters where Canada has few resources to respond to potential disasters.

“It should send a signal to Ottawa that more and more ships are coming, that serious countries and serious companies see the Northwest Passage as a viable route – or a route that will become viable in the next decade or two,” said Michael Byers, a University of British Columbia professor who has written extensively about the Canadian Arctic and holds a Canada Research Chair in global politics and international law.

The guidebook is intended to be an “Arctic passage operating manual,” according to China’s Ministry of Transport, which replied to questions by fax and called the Canadian route “the world’s most efficient and fast passage.” The ministry pointed to the sailing of the Nunavik, an ice-strengthened ore carrier that in 2014 made the first unsupported trip from near Deception Bay, in Quebec’s Nunavik region, to northeastern China. The route was 40 per cent shorter than crossing through the Panama Canal.

The main Northwest Passage ship traffic is likely to be containers hauled from China to the eastern seaboard of North America, said Yin Jingbo, a maritime economics researcher at Shanghai Jiao Tong University An initial shipment could be made “pretty soon,” he said, and eventually build up to large volumes. Research suggests the Russian Northeast Passage, for example, could carry five million 20-foot equivalent containers per year, 40 per cent more than the annual movements through Port Metro Vancouver and “dozens of ships” per day, Prof. Yin said.

But in Canadian waters, he said, “real commercial operations will have to wait a long time.”

The Ministry of Transport pointed to a lengthy set of obstacles, including reliable infrastructure, hydrology data, telecommunications, rescue facilities and low efficiency. “Due to the many uncertainties of Arctic sailing, shipping times can’t be guaranteed, which is not good for container ships,” the ministry wrote.

In recent years, however, southerly routes through the Northwest Passage have regularly been open and growing numbers of ships have sailed through – more than a dozen last year, most of them pleasure boats. Larger vessels are experimenting, too. This summer, Crystal Cruises plans to send its 250-metre Crystal Serenity through the Northwest Passage, accompanied by a British icebreaker.

The prospect of Chinese commercial traffic, meanwhile, stands to renew questions about Canada’s claims over the Arctic waterway.

The United States disputes the Canadian position, calling the passage an international strait that should offer rights of “transit passage.” The legal distinction is important: The U.S. believes Ottawa should not hold the right to block any ship from entering the Northwest Passage, although under international law it can pass regulations meant to protect the environment.

China has so far declined to take sides. Foreign Ministry spokeswoman Hua Chunying on Wednesday said China had noted the positions of both sides, including Canada’s demand that vessels ask permission before sailing through, and would “make appropriate decisions by taking into account various factors.”

China’s Arctic plans fit with a broader effort to disrupt longstanding global trading by pressing its industrial might into creating new shortcuts. It is, for example, attempting to remake Silk Road-era corridors for the modern age, sending the first container train from eastern China to Iran in February – a land journey 30 days shorter than by water.

Polar routes offer similar advantages. Cosco, China’s largest ocean shipper, sailed freighters across the top of Russia to Europe in 2013 and 2015. Chinese state media have called the Northeast Passage – which Russia calls the Northern Sea Route – a “golden waterway” for future trade, and a Cosco spokeswoman told AFP last fall that “there is an intention to open a regular line in the future.”

But most talk of Arctic shipping has so far proven ephemeral: After 71 transits of the Northern Sea Route in 2013, the numbers have fallen drastically, to just 18 last year.

The Northwest Passage offers its own particular challenges. Canada does not boast Russia’s fleet of nuclear icebreakers, which can be used to open the way for commercial service. Canada’s Arctic islands, too, present a much more complicated map for navigation, with their series of channels that move and trap ice; even if ice disappears from some areas in the summer, a thick crust builds up every winter, and its floating remnants can remain hazardous in the warmest of months.

“Sea ice is highly variable, and there will still be summers of occasional heavy ice conditions,” the Canadian Ice Service says. And the government of the Northwest Territories has warned that harsh northern conditions – including fog, unexpected shallow areas and shifting sand-gravel bars – pose navigation hazards.

Canada has a limited ability to respond to an emergency in the Northwest Passage, raising the dark spectre of environmental disaster in one of the country’s most pristine places.

Still, some in Canada’s North welcome the possibility of greater Chinese interest in the area, in part as a means to leverage more federal investment in roads and ports.

It “would be lovely to have additional shipping through the Northwest Passage,” said Doug Matthews, who has advocated the construction of a deepwater port at Tuktoyaktuk. “There are infrastructure challenges, but the more the shipping industry expresses an interest in traffic, the more the pressure will build on Canada to deal with that deficit.”

With reporting by Yu Mei